I haven't seen many through the mail successes online from Hall while he has been with the Oilers. The majority of the Edmonton Oilers squad seem to not want to participate in signing autographs through the mail. So snatching this Taylor Hall hard signed card for my set was a special addition. Also the card is #1 in the set so that contributes to the personal value of this pick up. 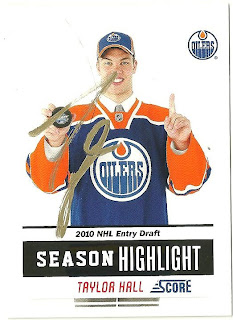 As the card depicts, Hall was drafted first overall in the 2010 NHL Entry Draft by the Edmonton Oilers. Hall has had a highly successful junior career, helping the Windsor Spitfires to two consecutive Memorial Cup championships in 2009 and 2010. He was named Most Valuable Player of the Memorial Cup tournament both times.

Hall has a lot on his shoulders as he is a big part in the rebuilding of the Edmonton Oilers.

As for the auto, I've seen a lot nicer from Hall, especially if you go back to his rookie year cards. But this was apparently collected in person at the arena and is basically more of a squiggle than a sig. But because he is a tough signer through the mail - I'll take it although it's a pretty weak looking version of his john hancock.
Posted by Brad at 18:56 No comments: