Found a local card shop selling 1992-93 Upper Deck Series I and II for about a buck a pack so I picked up a few to get my waxjunk fix.  I had a ton of 1992-93 Upper Deck as a kid, so when I  attempted to better organize my collection I decided to collate the rest of the set just for fun.  The base looks clean and there are a boatload of interesting subsets scattered throughout.  Here are a few of my favorites from the pack rips.

The Hasek card shown above is probably my favorite from the new additions; great photography on the front and back, before pulling it I had never seen it before.  Early in his career Hasek spent time as the backup netminder for Belfour - we all know what he later went on to achieve.

Just wanted to post a few cards that I picked up, mostly for a few sets that I have in the works from the past few seasons.  A few packs of cards here and there could do no harm.

Keeping all of these guys as I could use them or I just like the card. 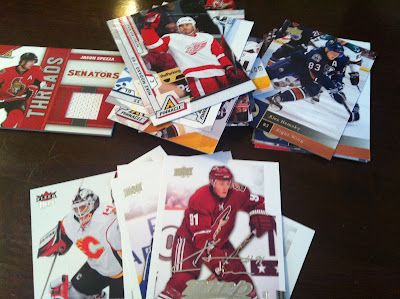 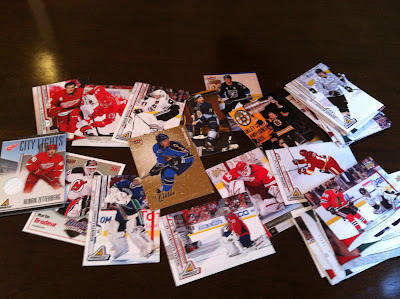 Both two very nice lots of cards. The Zetterberg 'City Lights' card looks sweet.  The auction can be found here.

Well I went out and brought home my first hobby box of product yesterday morning - I can't believe it, not because of the fact that I actually did it but because it was my first hobby box purchase since I picked up collecting again.  I think that it's been long overdue. 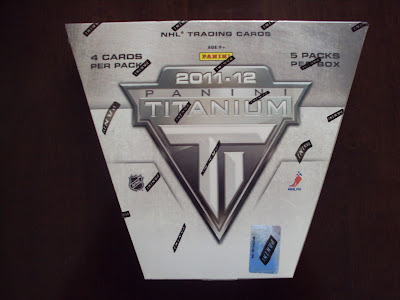 I decided to try my luck on a box of 2011-12 Panini Titanium.  Great looking set with a solid mixture of hits to pull.

My Ryane Clowe PC has been treading the water lately; my mind or wallet hasn't been there as of late.  Card collecting in general has taken a backseat due to life and my wandering hobby habits.  It's all beginning to take a turn though; recently I let go of a ton of cards that have become a tower of dime boxes in my bedroom.  The pleasure of having free space and organization instead of a clutter of cards has rejuvenated any ill feelings I've had about my collection.

Anyway I did pick up one new addition to the Clowe collection about a month or so ago. 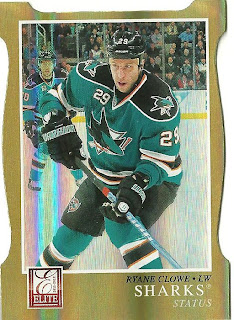 I picked up this 'Gold Status' /99 card for about $5 shipping in - It's nothing to write home about but eh, it's another Clowe that I needed that can be crossed of the list.  There are still another three Clowe cards birthed from the 2011-12 Donruss Elite set that I need; the base, 'Aspirations Die Cut' and the 'Passing The Torch' auto featuring Dan Cleary /100.  The 'Passing The Torch' card is a redemption that I've attempted to bid on several times in the past but have yet to win.  Apparently Clowe isn't good with getting his stickers back to Panini - I've been waiting on an auto/jersey redemption from Panini for a few months now which tells me that I'm better off waiting until the actual card arrives on the secondary market.

Which reminds me, I redeemed a 2011-12 Upper Deck Artifacts rookie card back on September 23, 2011; first day Artifacts was released and I'm still waiting on my card.  Think I should give them a call?  Has anyone received their Artifacts rookie redemptions from Upper Deck?  It wasn't even an auto.