A nice through the mail return from an All-Star awaited me in the mailbox this morning.  It was a pleasant surprise as I had sent this out during the playoffs last season and had written off all the cards that I had sent out then.


I'm happy to add Chara to my Panini stickers signatures collection.  I'm personally not a fan of Chara nor do I dislike him, he's unarguably one of the elite blueliners in the game and a top pick in any fantasy draft.
Posted by Brad at 07:30 4 comments:

While sorting through my stack of boxes that I mentioned in a previous post, it came to me - I've always really liked food issued hockey stuff a lot more than I thought I did.

You don't see the NHL marketed on products as much nowadays as you would growing up during the 1980s through the 90s. Walking down a Kraft aisle at a grocery store was like taking a stroll through the Hockey Hall Of Fame.

I came across these neat Jell-O cards while picking through some stuff. I cut them out from packages of jelly mix nearly 25 years ago, I honestly can't believe I've been able to hold onto them for some long! But I can see why.

Released by Kraft Canada in 1995-96, these cards have been given the set title, 'Crease Keepers'. I thought they were pretty cool and highlight each goaltenders choice of mask during the 90s. Definitely a nice set for any goaltender or mask collector. Soo what do you guys think?  What's your favorite mask design from the above 1995-96 food issues?

Personally I'm going to have to pick McLean's mask as my favorite from the group.  Flashiest would have to go to Lacher.  And well, Fiset and Kidd - they're all memorable during their era.
Posted by Brad at 06:55 4 comments:

While sorting through a couple of card boxes, I hauled out a few of the best goalie mask cards that I came across.  I was lookng for close ups, mid-game photography.  I think these first five cards are great starters.


Lalime's debut mask artwork with the Penguins has been a personal favorite of mine. As a Penguins fan it was something to cheer about when Lalime was hot from his start, going on a 16 game unbeaten streak. I only recently learned that the penguin is breakng through an egg and not an ice iceberg as had originally throught for years.
Which is your favorite mask design from the above?  Belfour has icon mask status and so does Roy's Canadiens design largely due to his legacy in hockey as opposed to the actual artwork.  But maybe you'll disagree.
﻿
Posted by Brad at 08:29 11 comments:

Collecting Resolutions For The New Year

A belated Merry Christmas and a Happy New Year!  I hope that everyone had a good one.
Haven't added much lately hence the lack of updates.  I've picked up maybe 1-2 cards since my last blog post almost a month ago.
But with the start of a new year I wanted to write up my collecting goals I'm setting out.
﻿ 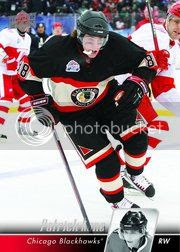 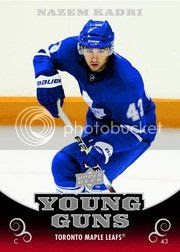 Finish My Incompleted Sets - I have about ten plus sets that I've began collecting these past two years. They are yearning to be completed with just under 20 cards for some sets (minus the SPs).

Work On Completing A Young Guns Set - As previously mentioned, I have about ten sets that I have properly organized; these are considered my main chase sets.  There's a few years of Upper Deck on the checklist and I would really like to go deeper by collecting the Young Guns short prints.  I'm hoping to at least complete one set of these during 2013.

Complete More Trades - Always a good resolution to hold in the hobby.  Although I made many trades over the past year, I'm going to raise the bar a little more for this year.  I've been finding it difficult to find the time to complete trades recently, I have a few in progress at the moment that I have yet to finish seeking out.

I'm happy to announce that I completed my first ever Zistle trade recently.  There were no big cards exchanging hands but there was a sum of base going both ways.

I landed 18 cards, 16 base and 2 inserts, to help towards my 2010-11 Donruss set.  A considerably hefty chunk to check off the want list although I still need 25 more cards to complete the base alone.

Here's one of the two Ultimate Draft inserts that were included as extras in our swap, the other Ultimate Draft card being Dustin Brown - both of these cards I had needed.

I haven't been purchasing much stuff lately, my hobby interest has toned down a bit - maybe it has something to do with the lack of NHL action.  I've been attempting to organize my older cards and fill their sets so I can archieve them and clean up a few binders.  It's definitely on my 2013 New Year's Resolutions collecting list.
Posted by Brad at 06:05 3 comments: