While away I still managed to run into some hockey stuff that I gladly took back with me.  A couple cards, a couple pucks, vintage pins and well, I'll show just you.

While visiting a friend I was given a couple cards from a lot of top loaders that he had kept away in a drawer from when he collected cards as a kid.  While there wasn't much in the lot that I would consider top loader worthy, I did walk away with these two cards: 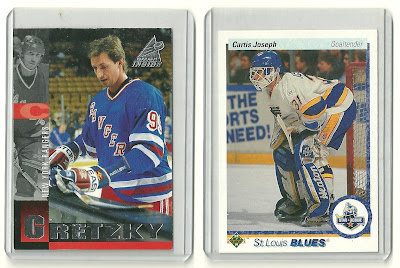 1997-98 Pinnacle Inside #3 - Wayne Gretzky.  Another Gretzky card to add to my collection is always nice.  This card came from one of my favorite sets, Pinnacle Inside.  Most known for how the cards were packaged inside a tin can that could only be busted using a can opener.  A pain in the ass but it was creative and the cards were designed nicely with the backs featuring a list of trvial facts that you wouldn't know otherwise (or care for).  For instance, did you know that Gretzky's best man at his wedding was former NHLer Eddie Mio?  Not me.
1990-91 Upper Deck #175 - Curtis Joseph.  An Upper Deck Curtis Joseph rookie card was the other card that I decided to take off his hands.
I found these vintage pins that belonged to my brother in a box that i decided to keep.  I remember he had a ton of these logo pins but I could only find four.  My favorites would be the Islanders and Jets logos.

Me and my fiance do some thrift store shopping so we stopped into a store that was near my home to see what we could find.  Along with a Brave Heart Lion Care Bear plush and a Wrinkle Dog ornament I found a box of these Topps Puck Attax going for 10 cents. 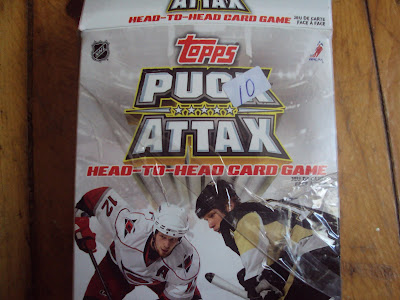 Something I would never buy at retail but at just 10 pennies I decided to pick it up solely for the toppers inside.  18 was included with a vinyl game mat (which I tossed), here are my three favorites.

Alexander Ovechkin - Platinum Parallel.  If these are worth anything at all I'm going to say that this was worth the ten cents I paid for the opened box.

Teemu Selanne.  Love Selanne.  Wish I could fit these in a top loader but they are much too wide.

I also came across two pucks in a cardboard box that I owned as a child that I decided to bring back with me... 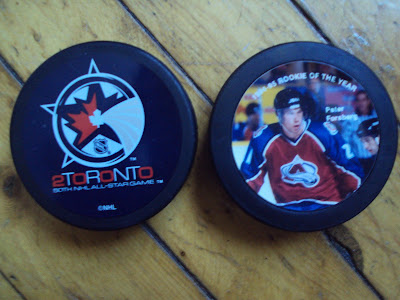 1999-2000 50th NHL All-Star Game.  I'm not even sure where I got this but the reverse of the puck has a Mastercard logo printed on it.  Pavel Bure would win the games MVP honors.

1994-95 Rookie Of The Year - Peter Forsberg.  I think I received this puck as a gift for some occasion, Forsberg was and still is one of my favorite players.  Licensed product by the NHL but I couldn't find anything online like it.
Posted by Brad at 06:16