Received another Gretzky in an Oilers outfit card on the heels of my Gretzky kick.  I had won this on an eBay auction a few weeks ago along with the dual Gretky point leader cards but it just so happened that it was shipped to the wrong address the first time around. 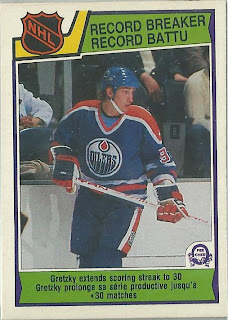 This card celebrates Gretzkys scoring streak of 30 consecutive games from the 1982-83 season.   Gretzky would break his own record the following season going 51 games from the beginning of the season.
Posted by Brad at 03:46