Hello hello.  I'm back from my vakay.  On the way back into town we had to stop into a Wal-Mart along the way to pick up some kitty food.  As per usual the checkout aisle was lined with trading cards so I decided to pick up a discounted box that promised a memorabilia card inside.  I've seen these before but repacks aren't usually kind and so I was skeptical.  But this time I said why the hell not. 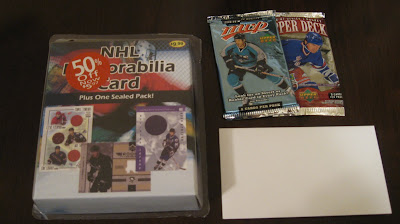 From the 2006-07 Upper Deck Series 2 pack I pulled all base, Mike Modano being the best out of the five cards.  Inside the pack of 2006-07 Upper Deck MVP I found seven base cards and a Joe Sakic 'Clutch Performers' insert.  Nothing big so far, nothing worth scanning in my opinion.

But now for the ensured memorabilia card; inserted inside a plain single white envelope... 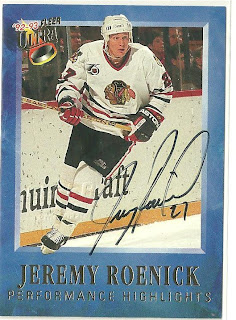 Ta-da! I couldn't believe it, I pulled a 92-93 Fleer Ultra Jeremy Roenick autographed 'Performance Highlights' card.﻿  The card also features a small crimped stamp of authenticity by Fleer to distinguish that it`s fully legit.  Well worth the $6 that I gambled on this repack.
Posted by Brad at 18:07